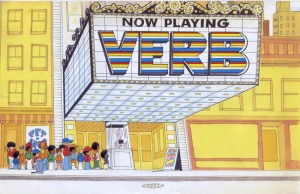 During my childhood in the 1970s & 80s, Saturday mornings were a special and almost sacred time, in large part because of Saturday morning cartoons and the bit I looked most forward to–Schoolhouse Rock.

For those who are not in the know, and I am always surprised when folks cannot sing the preamble to the Constitution or know that zero is my hero, Schoolhouse Rock was a series of catchy songs set to animated cartoons. The series helped a generation of children understand complicated concepts such as how a bill becomes a law, the values of immigration for society, or the function of a conjunction in a sentence. Music is a great way to learn, and there have been many times in my adult life when I have returned to what I learned via song and cartoon  all those decades ago on Saturday morning.

This Lent, for example, I’ve been playing around in my head and heart with some of what I learned from Schoolhouse Rock about grammar.

Think about it … Lent itself is a funny word.  The online Merriam-Webster Dictionary defines Lent as the “40 weekdays from Ash Wednesday to Easter observed by the Roman Catholic, Eastern, and some Protestant churches as a period of penitence and fasting,” with the origin coming from the Middle English word for springtime. Living on the East Coast as I am these days, where there is still frost in the mornings and the possibility of snow, it is easy to understand why this season of anticipation took its name from the hope for spring!

Of course, the word lent has other meanings as well.  In French the letters l-e-n-t  become and an adjective meaning slow, which is entirely appropriate for the Lenten Season. Adjectives, as the “Unpack Your Adjectives” Schoolhouse rock video taught me as a child, “are words you use to really describe things, handy words to carry around.”

I carry lots of things around these days, mainly a growing list of urgent things that need to be done. Yet the wisdom of the Lenten season is that, as a church, we set aside a time each year which carries with it the higher priorities of slowing down through prayer, fasting, and almsgiving. The French adjective lent is a good word to carry around in my heart as I slow down during these 40 days.

Lent also has other meanings in English. For example, it can be the past simple tense or past participle of the irregular verb to lend. Verbs, as the Schoolhouse Rock video “Verb, That’s What’s Happenin’” reminds me, put “my heart in action … to work, to live, to play, to love.”   This is both a lovely and very challenging concept, especially when I consider the ways my heart is lent in action.

Who puts my heart into action? Who am I lent by?  Where do I lend my energy?