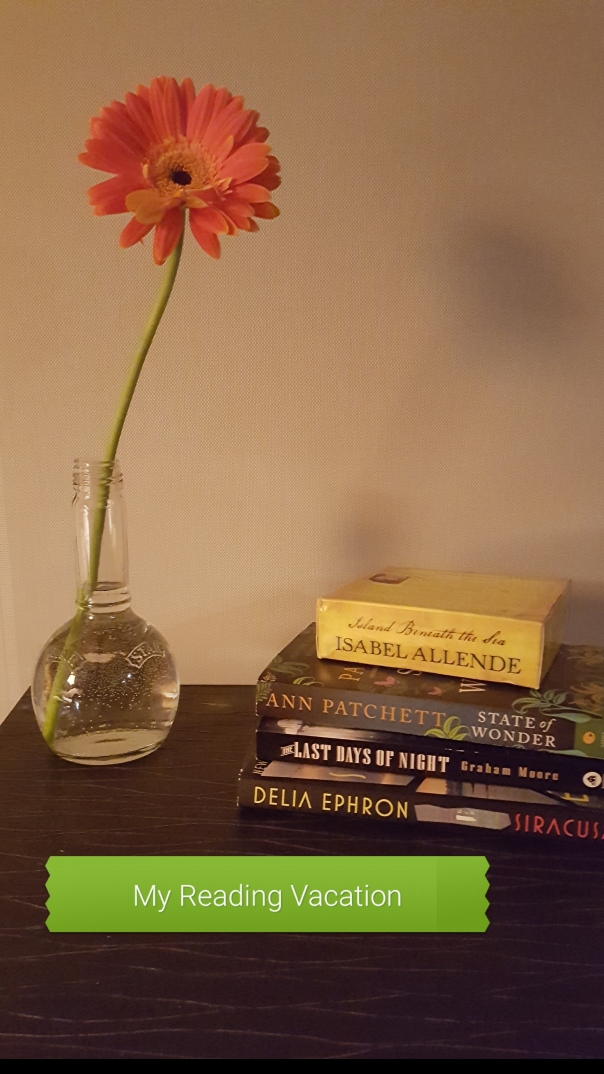 This year, I decided to do something I have always dreamed of … I took a reading vacation. Days of rest and renewal, moving around a bit (first the ocean, then the lake) but solitary for the most part. Except of course for those friends who jump off the page and into my imagination.

It has been a wonderful adventure, and has also helped me rediscover reading. Don’t get me wrong, I read some, but not like I used to. But after years of grad school when my brain could not absorb much beyond assigned reading, I turned to easy reads like mysteries on my kindle app. And of course, we are in the era of streaming television services! You know what they say about habits.

But I miss reading real books, and now remember why.

My vacation reading list? I am so out of practice in literary efforts that I am also out of the loop on newish fiction. So I did some research. I looked at recommendations online from Nancy Pearl and the bookstore, and picked up a great audio book at the thrift store for the car as I travelled around.

I will admit to liking some more than others, but they all held my attention and brought me into their worlds. I only managed half of The Turner House, because I think I left it at the Sylvia Beach Hotel. (By the way if you love books and the ocean google this marvellous place!). But will find another copy!

Island of the Sea was an audiobook read by by S. Epatha Merkerson. Her talent plus Isabel Allende’s words kept me captivated. It paints a picture of slavery in the colonial era in the North of Haiti, close to where our Sisters now minister. Plus it is just a human story, beautifully told.

I was surprised by The Last Days of Night, a historical novel about the fight around the light bulb patent. I know, sounds thrilling. It is by the same author as the Imitation Game and kept me up late at night and woke me up early in the morning, anxious to read.

As for Lucy Maude Montgomery, I am rereading the Anne Series this summer. It is in the public domain and you can download it for free. I am now part way through Anne of the Island, and it is a joy as an adult to rediscover the real Anne as described by Lucy Maude.

I have a few new books I have picked up at thrift stores along the way, but do not anticipate large chunks of time to read in the near future. But I may trade netflx for real books, at least some nights.

Books are such a gift. Saying a special prayer tonight for authors of all kinds!