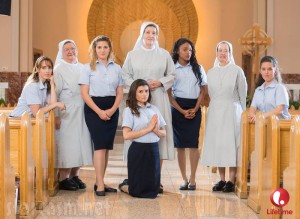 Ok, I’ll admit it … on more than one occasion during the early stages of my religious formation I found myself thinking, this would make for good reality tv. I was living in the alternate reality of a formation house with two other novices, my novice director and a professed sister. We’d all left the lives we were living to form a community together. In the midst of our formation classes and opportunities for ministry, prayer, and discernment, we also had to negotiate the kitchen, sharing common space, and simply learning how to be together.  That line from MTV’s Real World would periodically go through my head: “This is the true story of five strangers picked to live in a house, work together and have their lives taped, to find out what happens when people stop being polite and start getting real.”  Thankfully, there were NO cameras (although I did of course blog the experience myself).

Reality tv is all about “drama” (in quotations because really, how much of reality tv is actually real?) and if anything is dramatic, discerning a major life choice like joining a religious community and professing the vows of poverty, chastity, and obedience to God for life is certainly dramatic. Then there’s just the daily drama of transition, change, and gradual incorporation into religious life. Add in cultural dynamics, generation gaps, and the fact that you’re talking about actual human beings who have a tendency to be human and, well, there were moments that might make for entertaining television.

So, it’s not really a surprise that someone else not only thought about the idea but managed to bring some version of it to television. Despite the subtitle, as far as I understand, Lifetime’s The Sisterhood: Becoming Nuns, which premieres tonight, is not actually about women in religious formation as Sisters. Instead, it follows a group of twenty-something young women who might possibly be interested in religious life as they visit three convents to meet the Sisters and learn more about what it would be like to be a Sister. I suppose it’s more like a prospective student’s college tour where you stay on campus, eat in the dining hall, and go to class. Except that there are cameras and it is scripted into hour long episodes to be broadcast on national television.

My Catholic social media feeds are all abuzz about the show. Some are concerned that it only shows religious communities who wear a habit rather than those like mine who wear simple dress (as it happens, I do know that the producers reached out to a wide variety of communities so I don’t think it’s necessarily an intentional bias, but more a question of who agreed to take the risk of participating in a reality tv show). Others are concerned about the possibility of reinforcing stereotypes about nuns as being strict, austere, and living a life of sacrifice and “giving up” rather than a life of joy, love and service (much of the buzz I’ve seen so far keeps referencing scenes where the young women are told they cannot wear make up or use cell phones during their visit). And others seem to be hopeful, noting that if even one young woman who might have a vocation gives religious life some thought because of the show, then it would be a good thing. These all seem to be valid points to me.

My main caution is that even though the young women are not in formation, they are at least considering walking a very sacred and personal journey of transformation and a major life choice (unless they are actually just actresses but even then, the Holy Spirit can be sneaky so you never know). Having blogged my own way through formation, I know first hand that it is complicated and not so easy to share the call you feel in your heart or the movements of the Spirit. Then add in to the mix a third party producer who is most interested in ratings and advertising revenue, and I think you can understand my cautionary concern. Plus the producers are best known for Breaking Amish which brings a whole lot of different concerns that I will leave to your imagination.

I’ve not watched the show. I’m not sure I will watch the show, although I’m realizing I probably should, if only to see what images are being projected into popular culture about religious life. I do know that a number of younger Catholic Sister friends are planning to live tweet using the hashtags #thesisterhood and #nuntv. If I end up watching it, I might be live tweeting it myself.

3 thoughts on ““Reality” and Discernment – Thoughts on “The Sisterhood””