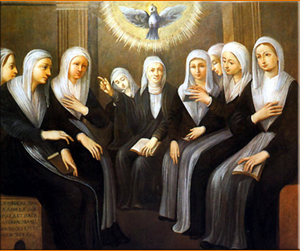 Today is the feast day of St. Angela Merici who died in 1540. She was a visionary woman who gathered others around her.  She won approval from her Diocese for the first rule written by a woman for a community of women.

Just before I embarked upon my new adventure in leadership, a friend recommend a book to me – Redeeming Administration 12 Spiritual Habits for Catholic Leaders in Parishes, Schools, Religious Communities, and Other Institutions.  (If this fits you, I highly recommend it!)

The first chapter speaks about the need to have  a breadth of vision and includes this powerful quote from Angela:

‘This charge must not be a burden for you; on the contrary, you have to thank God most greatly that he has deigned to see to it that you are among those he wants to spend themselves in governing and safeguarding such a treasure [as] his own … Do not be afraid of not knowing and not being able to do what is rightly required in such a singular government. Do something. Get moving. Be confident. Risk new things. Stick with it. Get on your knees. Then be ready for big surprises.’

She wrote these words just before her death. They were written for the Company of Ursula, the small community she had gathered just five years earlier.

Given my new adventure, I have been struck by her words in a particular way, but I think they apply to so many people and situations.  If we waited until we had everything figured out, then nothing would ever happen. Sometimes we have to just do something. To move. To risk. To stick with it. And to pray.  And when we do, to be sure, God has even more surprises in store.

1 thought on “Angela Merici: “Do Something””